Colin And The Road Trippers 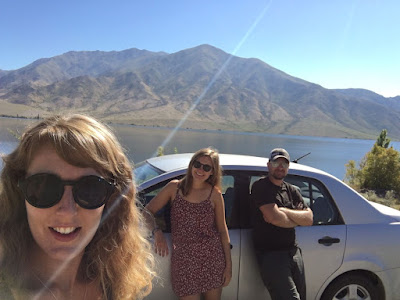 At the end of January, my friends Tina, Emma, and myself rented a car and went on a road trip from Queenstown, down around the southern part of the South Island, up the east coast, over to Mount Cook, and then back to Queenstown. It has honestly been the highlight of my time in New Zealand so far. I got to see some incredible sights that I think would have otherwise been overlooked had I taken a bus around. Not that I’m regretting travelling with Stray at all. I also got to spend the week with two of the loveliest people that I’ve met here. Win/Win situation for me!

Our trusty steed was named Colin. A spacious car that needed a fair bit of coaxing, especially when going up hills. The personality of Colin was that of an older gentleman, wearing tube socks with sandals and going over his stamp collection. He and I got along quite well. He got us where we needed and wanted to go, though he was quite thirsty and gas isn’t the cheapest over here. At the time of writing it’s averaged at 212.9/litre New Zealand, or 183.9/litre Canadian. That’s quite a bit more than I’m used to paying. A quick search for gas prices back home in Edmonton shows that gas is currently averaged at 104.9/litre, a staggering difference. But what can you do, eh? 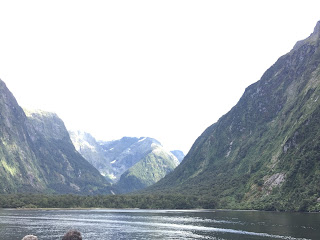 After leaving Queenstown our first stop was Te Anau for the night so that we could catch a boat cruise around the stunning Milford Sound. The sights were absolutely majestic and the weather was spectacular. In fact, one of the photos that I took and posted on Instagram (@distractedjedi, if you wanted to take a look) is one of my most liked photos ever. The Sound itself was sheer cliff faces, waterfalls, and seals and sea lions basking in the sun. The cruise was filled with interesting facts about Milford Sound that I must admit I didn’t really listen to. I was taking in the view.

The day didn’t end with the cruise. In fact, it was just the start. There were a number of stops that we had penned out for the return which involved a few short hikes in Fiordland National Park before heading back to Te Anau for the night.

It was my turn to drive on the way back and I am pleased to announce that I didn’t kill anyone with my first time driving on the left hand side. It was actually quite quick to get used to, and with both Tina and Emma napping in the back after the hikes it shows that they were quite comfortable with my driving.

The next morning we were off for the southern part of the South Island, Colin chugging along reliably, if occasionally argumentative. Before we reached our destination at Curio Bay we made a few stops. A quiet secluded spot on top of a hill overlooking the ocean was our lunch destination and we got our first glimpse of dolphins swimming in the wild. Quite far away, but it was an exciting moment. Especially for Tina who, unlike me, shows excitement quite readily. 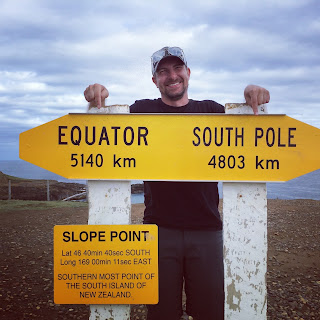 We also made a brief stop at Slope Point, the southern most point of the South Island of New Zealand. It is 337km closer to the South Pole than it is to the Equator. And it marks the furthest south I have ever been! Maybe one day I’ll see Antarctica, but this’ll do for now.

After a long drive on gravel roads, we made it to our accommodation for the next two nights. A cozy little backpackers hostel right off the beach and close to a penguin colony. Once we got settled into our respective rooms and had finished supper, we headed for said penguin colony for a brief look and to see if we could spot any penguins. We did, but the lighting was quite poor and they were too far away for some pictures. The sunset was quite a sight however, so the trip wasn’t a waste. Even though we were startled by a possum wandering around the place. 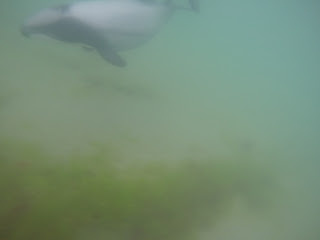 The next morning was Dolphin time. After a hearty breakfast which consisted of (for me) coffee, we were off down to the beach to swim with the dolphins. They did not disappoint! At some points they actually got quite close, though it was hard to catch them in photo. It was also my first time trying out my GoPro under water, and without goggles to see what the GoPro saw, the photos were a bit disappointing. However, on my Instagram account I have a video which shows how close the dolphins actually got. It was really surreal, and an experience that I will cherish and remember forever.

Unfortunately the weather turned in the afternoon and we were forced inside and had to scratch our plans for the rest of the day. Instead, we completed some administrative duties, sorted through some photos, and watched some Netflix. Perfect rainy day movie? What We Do In The Shadows. Highly recommended!

Catching Up With Friends

The following day saw us leaving the dolphins and the south coast, heading up on our way to Dunedin with a few stops along the way for photos and to stretch our legs before we arrived. Dunedin is a college town with students populating its streets, though at the time of our visit school had not resumed from summer vacation. To be honest, we didn’t see a lot of Dunedin. We were only there for one night, and that one night involved sitting in a pub and catching up with a couple of friends we had met in Rotorua. Kayla had sights set on settling down in Dunedin and succeeded in that, regardless of it not being the place she had originally wanted. Max is there for an internship at the University. Fred is also travelling around on his own and happened to be in Dunedin at the same time as us, and it was great to catch up with all of them. With my background as a bartender, I’m considering making the move there to work for a bit myself. Students like to drink after all. And it’ll be a great place to meet Locals and Internationals alike.

Air B&B In The Middle of Nowhere 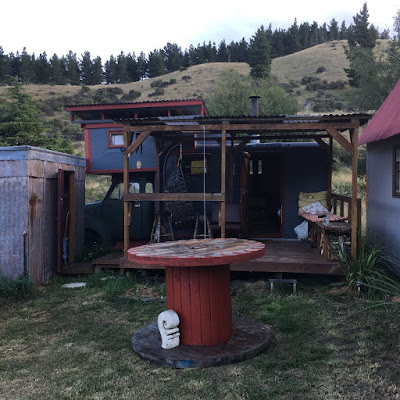 After leaving Max, Kayla, and Fred in Dunedin (after an unproductive morning of shooting the shit), we proceeded on our way off to our next destination. A quaint little Air B&B just outside of the small town Kurow. The place that we rented was a tiny little home made from a converted motorhome. No power, but had running water and a wood burning stove for heat (not that it was needed).

The landlords, Bianca and Andrew, were equally charming. We spent our first evening with them playing cards, drinking wine, and chatting about nothing in particular. It was very comfortable. When the sun set too much to continue on with cards, we went into Bianca and Andrew’s kitchen for a few more drinks and chatting. Being a bartender, they had allowed us access to their liquor cabinet to see what I could conjure up. Alas, I must admit that there wasn’t much I could create. But I did try!

After the mostly unsuccessful round of cocktail creations, we headed up the hill behind their house to appreciate the stars. Their property was an old sheep paddock, their house is a converted barn, and on their 11 acres of property is a wooded hill with a clearing at the top. Perfect for stargazing. Unfortunately the moon was a tad too bright to really appreciate the stars. It was nearing the Super Blue Blood Moon phenomenon after all. But there were some good views to be seen regardless. And that was pretty much our evening in a nut shell. Low key and very enjoyable. Plus, it was my best sleep in ages.

Though we had grand plans of awakening early and heading on our way to Mount Cook, that didn’t actually happen. As it turned out, we all had one of the best sleeps in ages so none of us got up when we were planning on it. We made it to Mount Cook during the day, but we had a hearty breakfast before hand. Mine involved bacon, eggs, and toast with jam. Definitely a winner in my books. The idea was to have a large filling breakfast and then perhaps just a small lunch during our hike. 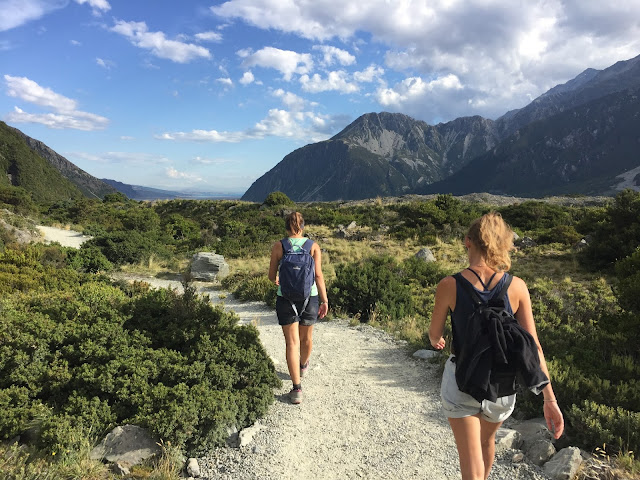 After the two hour or so drive (including random stops at interesting points) we arrived at Mount Cook National Park. We were debating the few days before on whether we wanted to do the Mueller Hut Track, which is an eight (8) hour return hike, or a couple of the smaller hikes. We chose the smaller hikes option.

We started with the Hooker Valley Track, which was a 3 hour return hike and mostly flat. Only an eighty (80) meter incline, the hike was more of a walk really, but I thoroughly enjoyed it. There’s something about being out in nature that brings me great joy and the landscape is something else, as the pictures can attest. 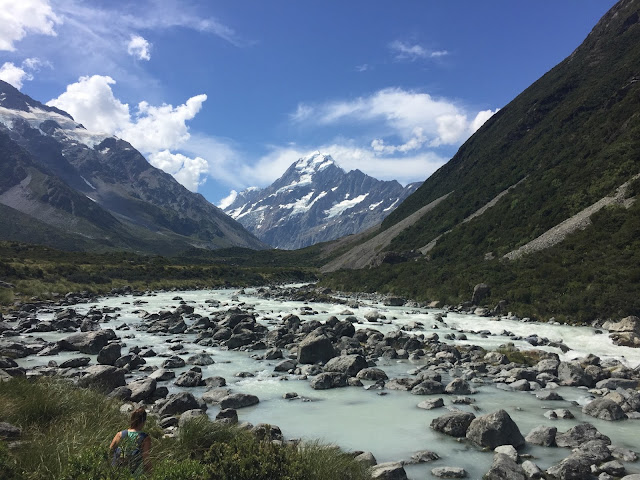 It took us just over an hour to reach the end of the track, which was at Hooker Lake, on the tail end of the Hooker Glacier. We took our time there, with Tina and Em napping on the small stone beach. Oddly enough, the glacial lake was warmer in comparison to the streams that feed off of it. Though that doesn’t stop small icebergs broken off of the glacier from sticking around. 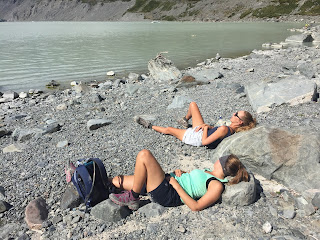 After lunch and napping, we decided to head on back for the next little hike we had planned. This one was shorter, though steeper, and ended at a lookout for the Tasman Glacier. The landscapes couldn’t be more different. Whereas the Hooker Valley track was quite green and full of life, the Tasman Glacier Track was only partly green. When you got to the top of lookout, the half down to Tasman Lake was barren and full of rocky scree. The glacier itself is the longest in New Zealand, measuring at 27km (or 16.7 miles). 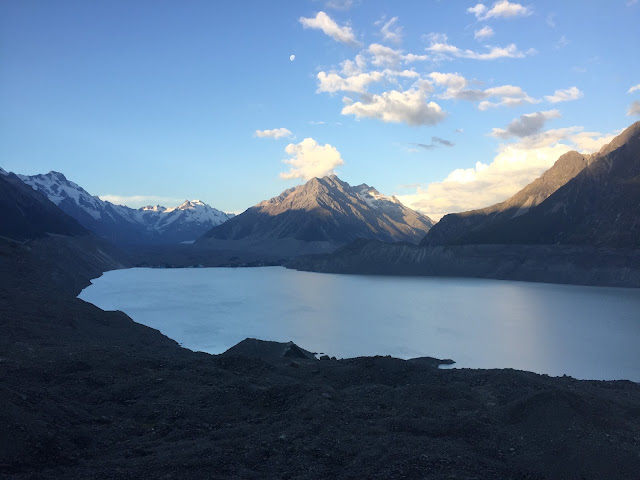 After a nice long sit there, it was time to head back for a brief snackish type of supper and to see if we could see any stars. Unfortunately the stars didn’t pan out for us and we were forced to concede defeat and head on back to our cozy little home. 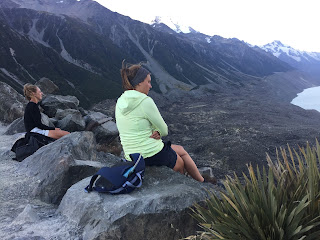 After breakfast and coffee the next morning, we decided to head on our way back to Queenstown to drop off our trusty Colin. We had to have him there by 4:00pm, but decided to drop him off early and that meant there were very little stops along the way. But that was definitely made up for by the choice in music. Via Spotify, Tina put on a playlist aptly titled “Road Trip Sing Along”. And that’s exactly what we did. We pretty much sang the entire 3 hour drive back to Queenstown. It kind of reminded me of karaoke with friends in Japan. It also meant that our time together was nearing an end.

I’m not exaggerating when I say that the week was the highlight of my time in New Zealand so far. There’s something to be said about having the freedom to go where you will when you want. Something that can’t be done while sticking to the bus schedules. Eventually I’ll buy my own car here and when I do I’m looking forward to the next trip, and hopefully it’s with people as equally charming and kind as my friends Emma and Tina. 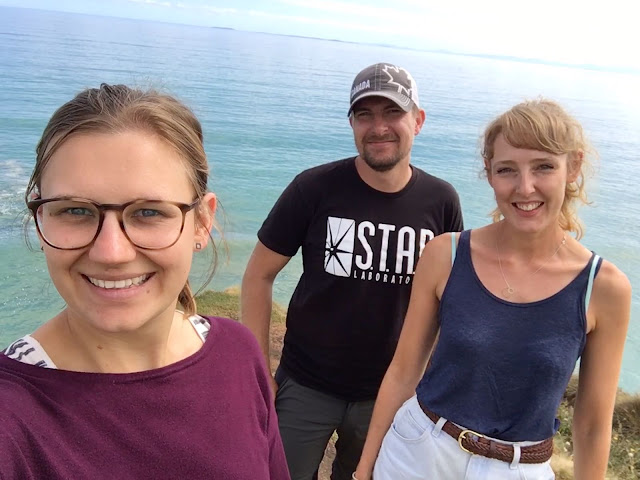