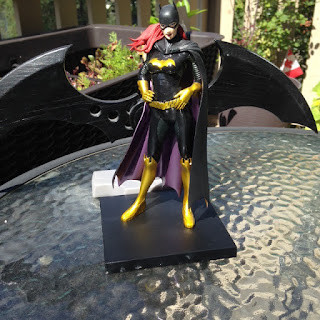 I was reading a comic the other day (no surprise really) and came across a line of dialogue that made me stop and think. The dialogue comes from Bryan Q. Miller’s run on Batgirl (Issue 3, v.3 2009-2011). It’s a great run, with Stephanie Brown (former Spoiler, former Robin) taking on the mantle of Batgirl and being mentored by Barbara Gordon, the original Batgirl.

To set up the scene: Steph dons the familiar cape and cowl and becomes Batgirl. Babs isn’t too pleased about it and reluctantly aids Steph in hunting down Scarecrow, who is selling a new version of his Fear Toxin as a drug called Thrill. During her fight with Scarecrow, Batgirl is exposed to Thrill and begins to hallucinate. However, before her confrontation, she had inoculated herself against the Fear Toxin. When the inoculation counteracts Thrill, she’s able to come to her senses and go through this little speech that causes Babs to accept that maybe Steph CAN be Batgirl after all. 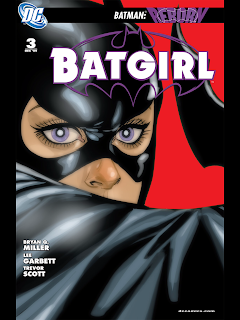 Page 13
Panel 3 – BATGIRL: A GUY ASKED ME A QUESTION THE OTHER DAY ABOUT WHY PEOPLE RUN WHEN THINGS GET TOUGH.
Panel 4 – BATGIRL: THAT’S  EASY - - YOU CAN BECOME SOMEONE ELSE, WHEREVER YOU LAND, RIGHT? WHO’S GOONA KNOW THE DIFFERENCE?
Panel 5 – BATGIRL: SO WHY STAY? WHY SET YOURSELF UP FOR MORE FAILURE? FOR MORE PAIN?
Panel 6 – BATGIRL: ALSO EASY - - BECAUSE WE DON’T KNOW HOW TO DO ANYTHING ELSE.

Page 14
Panel 1 – BATGIRL: SO WHY STAY?  WHY OPEN YOURSELF UP TO ALL THE BAD YOU’VE TRIED TO LEAVE BEHIND?
Panel 2 – BATGIRL: “THE ONLY VARIABLE YOU CAN CONTROL IS YOURSELF.” YOU CAN FORGET WHO YOU ARE, OR YOU CAN BE WHO YOU WANT TO BE.
Panel 3 – BATGIRL: THAT’S WHY YOU STAY. YOU STAY FOR A SECOND CHANCE.
Panel 4 – SCARECROW: BUT IF YOU STAY, YOU’RE FORCED TO FACE YOURSELF… NO ONE IS BRAVE ENOUGH TO FACE WHO THEY REALLY ARE!
BATGIRL: I AM - -
SCARECROW: AND WHO MIGHT THAT BE?!?

Now that I’ve completely typed out three pages of comic script… Why do we stay? Why do we run? To be honest, I agree with Steph’s answers to both questions. But what takes more strength? Staying or running? I, personally, would argue that staying takes more.

However, one of the issues of running when things get tough is the fact that you’re still running from something. Eventually things will catch up with the runner. You’re not really escaping from anything, you’re just changing settings.

Staying. Staying forces you to get to the root of the problem. Sure there’s more pain and failure that comes with staying, but there’s also hope and second chances. Just because you’ve had a crappy day/week/month/year doesn’t mean you should run away (unless you really have your heart set on it). Who knows what second chance might be waiting in the wings for you. 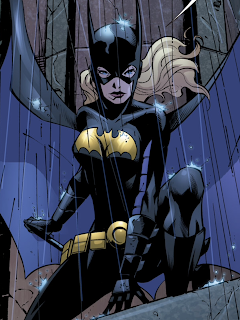 But as Scarecrow says in the comic: If you stay, you’re forced to face yourself. And no one is brave enough to face who they really are. I somewhat agree with him. It’s a scary thing, facing yourself. That’s part of the reason why we wear so many different masks in our everyday lives. I also somewhat disagree with the fear addict. EVERYONE has the capacity to be brave enough to face who they really are. It just comes down to if you’re ready or not. There is hope out there. Go hunt it down.

Email ThisBlogThis!Share to TwitterShare to FacebookShare to Pinterest
Labels: dork, self, thought