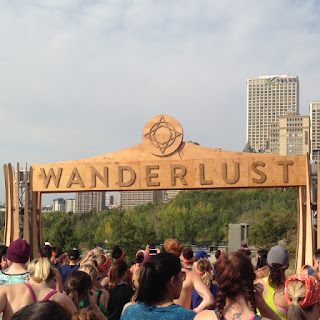 My blogging has been failing lately. I know it. I haven’t done much of anything really. Unless I’m out with my friend Cassie, I’ve been at home attempting to save money. That means putting time onto working on a costume for the Edmonton Expo, or playing either Dragon Age: Inquisition or Batman: Arkham Knight. Not a whole heck of a lot going on currently.

However, on August 29th, my friend Mandy and I did Wanderlust 108 down in the Edmonton River Valley. Usually the events that I go to involve comic books, video games, and/or media guests from television and movies. But this one was an active event. A 5km run, two hours of yoga, and a half-hour of guided meditation. Hopefully participating in that would boost the lacking physical activity that I’ve been missing lately.

The run was the part that I was worried about. I only really started running this year, and by no means is it on any regular basis. But this 5k wasn’t competitive at all. That appealed to me. It didn’t matter how fast I went or what place I crossed the finish in. It’s cliché to say, but ‘the only true competition is with yourself’. As long as you do better than previously you’re winning. And I did. I haven’t been able to make it to 5km in my running previously. I have a route that I follow and It’s just shy of 4km. This time I made the 5km mark. A good accomplishment.

Following the dash through the River Valley, it was time to set up the yoga mats for two hours of yoga. Something about yoga outdoors (or any activity for that matter) has a different feel than doing it in a studio. It’s hard to describe… Maybe more of a feeling of contentment, if that makes any sense. Less like you’re going to be judged. I don’t know. As I said, it’s hard to describe. 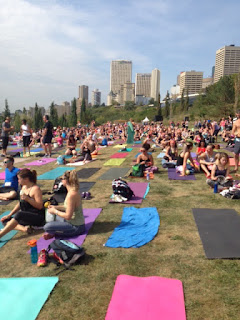 Anyway, two hours of yoga. That’s the first time I did yoga since just before I left for Spain. The second time I’ve done yoga since the beginning of November last year. Needless to say, I was feeling tight and sore all over.  It was very much needed and I’ve been thinking since then that I need to get back into doing it. Hopefully once I have a bit more of a steady income again I can return to both yoga and aikido.

After yoga was a half-hour or so of guided meditation. Unfortunately I found that the meditation part wasn’t anything stellar. But it was still nice to just be still and allow the accomplishments of the day to soak in.

The day closed out with a brief wander around their market place and dinner at Kyoto for some sushi. If there was one thing that I could eat for the rest of my life, it would be sushi. And Kyoto has always been good to me when I’ve gone in before.

Wanderlust 108 was a great experience! Yoga (and other internal arts) is becoming more and more ‘mainstream’ and attracting more people to it all the time. I can only hope that events like this become more common around the city. I, for one, will definitely be going again.

If you’re interested, you can read about the Wanderlust Festivals by clicking the link here. 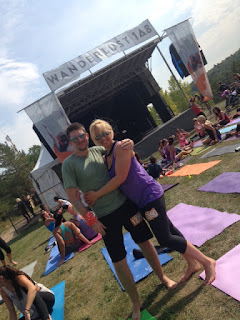