I'm Going On An Adventure! 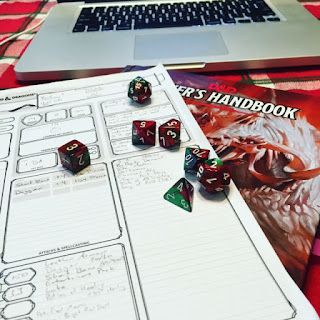 With Games-Workshop’s decision to kill off Warhammer Fantasy (one of my favourite games bar-none) and my reluctance to pick up the replacement game (Warhammer: Age of Sigmar) until they fix the rules everything, I needed to find a game to completely engross myself in and feed my epic fantasy cravings.

I mentioned in this post back in January that I had never really played Dungeons and Dragons before. I’m sure to many people reading this that it comes as a complete shock and surprise. To practically everyone I know and talk to, they are absolutely stunned. No one can understand it. Really, it came down to schedule. When you work a job that had no real set hours, and shifts were always up in the air, how could you commit? I couldn’t. And so I never really got to experience playing a table-top RPG growing up. 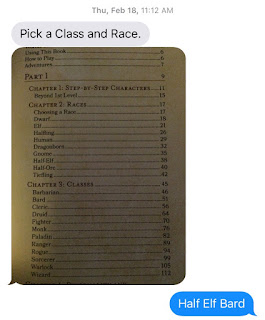 The start for this game was a simple text message with a picture from a friend. Literally: “Pick a Class and Race.” No other explanation, no real follow up. That simple question started the story for me. What really adds to it, I think, is that of the 5 people we have playing the game, 3 of us are beginners. Basically learning everything from the ground up. It’s a great way to start, because it’s always nerve-racking being the only newbie to join ANYTHING.

We’ve had three sessions now and it’s pretty spectacular. Our characters are so very different from one another, it’s interesting seeing how they mesh together to form this group. And what I find fascinating is that the characters seem to take on a personality of their own regardless of how you’ve planned them. Much like writing. For example, I’m playing a Half Elf Bard by the name of Flynt. When I first envisioned him, I was thinking he’d be much like the nameless minstrel in my story Gaining Music. But instead, Flynt has turned out to be a bit of a dick. And quite lazy. He doesn’t like to make a lot of effort on things and he’s a bit distrustful of people and new situations. Odd for a bard that's supposed to be the charismatic entertainer. He also rolls poorly when it counts. I mean really, really poorly. For all his flaws, I’ve kind of grown attached to him and I do hope that he survives for a bit so that I can have some more roleplay opportunities.

And so, instead of packing and cleaning my place for the move, I’ve been focusing and thinking about our adventure in a fantastical realm that’s rife with story opportunities and hidden dangers. I can’t wait to head back there with friends, both old and new. 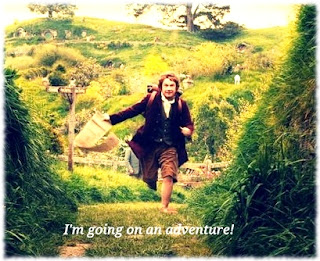 Email ThisBlogThis!Share to TwitterShare to FacebookShare to Pinterest
Labels: gaming