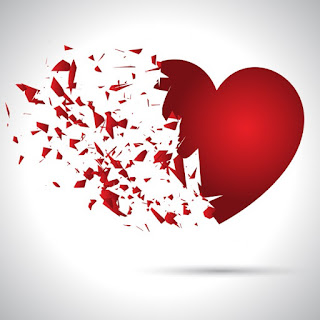 Unfortunately I had lost every nugget of post ideas and story ideas when my iPad got wiped and really, I've been much too lazy to think of something else to post. I did have a wonderful post with the tentative title of "The Disney Debate" centred around Disney's choice to drop the established Star Wars EU in favour of making everything a cohesive canon from this moment forward. I will admit that I was disappointed to hear that my favourite characters may never make it onto the big screen, but Star Wars has a sense of "new and exciting" again, and that is pleasing beyond belief.

I was also toying with the idea of posting some of my short stories on here. Something to keep me writing and honing my skills. As the saying goes: Creativity is a muscle that needs to be exercised. It needs to be cultivated just like any other activity and you can only get better through practice.

But what has really been a recent event in my life is truly what I want to speak on. And that event? Heart Break. I know everyone has gone through it at some point. Luckily for me, I have not. Before now, that is. Sure I've felt similar pain like the loss of a loved one, but this sensation is completely new to me. To know that your loved one is still around, just not loving you anymore. That is a very hard pill to swallow.

See, Dani and I have been together for the better part of 6 years. Almost 7 in fact. She found me just after the loss of my sister and was the one able to sweep the broken bits of me up and reassemble them into the person that I am today. She helped me conquer tragedy that I have never faced before, and then with the loss of my grandfather just over a year and a half ago she helped me again. I owe her so much more than I can ever put down on a single post. Or maybe more than I could ever write and share. Most definitely more than she knows. She is the person that I want to marry. The mother that I want for my children. The person that I want to grow old beside.

It's my fault, really. I had plans of marriage and family. Her plans too, though I took too long to pull the trigger and ask for her hand. Oh, how I would give anything to have her with me right now. By my side and never look back. But, alas, it's not meant to be and I have spent the better part of 3 weeks crying multiple times per day. Which, let me tell you, sucks when you are starting a new job. People start thinking you're crazy. But I don't care what people think of me. This is my hard time to go through, and I'll go through it the way that I can. And if that involves tearing up during a meeting, then I tear up during a meeting.

The worst part, however, is the loss of my best friend. My constant companion. My soulmate. My partner. I know she still wants to be friends. I would dearly love to be her friend. But how do you remain in that friendship? How do you go from intimacy and passion to nothing and still have those casual friendly conversations? Every talk is going to be clouded with pain and regret. At least on my part. On hers? I honestly don't know what is going through her head. No one seems to. And as much as I would love some one to talk sense into her and explain things to me, I don't think it will help. The decision has been made and now we are stuck with the results.

In a nutshell, I would have done anything for this girl. Anything. But my anything doesn't seem to be what she wants and is looking for. Or she doesn't want it from me at least. And that hurts. How do you devote so much time to one person and have everything thrown away because it took too long for them to ask for your hand? Yes, I should have said something earlier. But I said it now. Does that not count for anything? No, I guess not. At least, it doesn't seem to.
Posted by Chad at 9:06:00 PM

Email ThisBlogThis!Share to TwitterShare to FacebookShare to Pinterest
Labels: self