The Road Goes Ever On And On 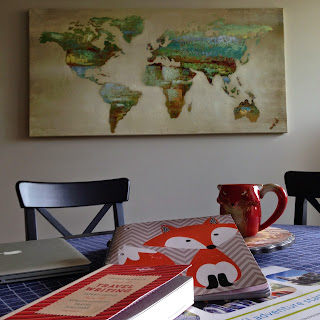 In just eight short days I board a plane for Barcelona. Off on an adventure of both internal and external discovery and completely on my own. When you stop and think about it, it’s actually kind of terrifying. To be in a foreign country by yourself, not knowing a single person or phrase aside from “dos cervezas por favor” can definitely get the nerves a little rattled. But that is also part of the charm.

My favourite books are ones in which there is a journey. An epic quest to destroy the One Ring. Or to find enchanted artifacts to ward off possession of a demon. Perhaps to seek penance for a past action that the character in question is wracked with utter guilt… And really, when all is said and done, I’m off on a journey myself.

The Road goes ever on and on
Down from the door where it began.
Now far ahead the Road has gone,
And I must follow, if I can,
Pursuing it with eager feet,
Until it joins some larger way
Where many paths and errands meet.
And whither then? I cannot say.

"He used often to say there was only one Road; that it was like a great river: its springs were at every doorstep, and every path was its tributary. 'It's a dangerous business, Frodo, going out of your door,' he used to say. 'You step onto the Road, and if you don't keep your feet, there is no knowing where you might be swept off to.'" ~ Frodo Baggins, The Fellowship of the Ring

I’ve spent so long standing still, letting the Road pass me by and sweep up so many other people. I’m done fighting it’s current. It’s time to set sail and go with the flow.

I’ve visited eleven countries in Europe already. This year I’m adding two more to the list and revisiting a couple of others. At least that’s the plan. As Bilbo told Frodo: ‘if you don’t keep your feet, there is no knowing where you might be swept off to.’ I may only end up staying in one country, or maybe visit another five. I’m so open to anything on this trip that it’s possible that I see nothing at all that I’m planning to and wind up walking around from place to place for my three weeks. Only time will tell, but one thing is certain: I’m becoming a world traveler. And I’m quite alright with that.