A Story With a Life of Its Own 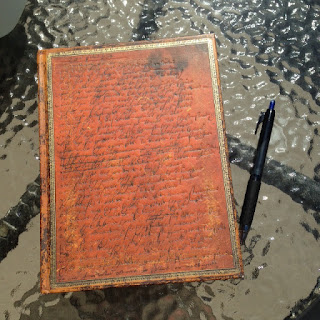 As promised in the last post, here is ‘The Traveler’.
Enjoy!

Another flash of lightning struck. A second later he heard another monstrous peal of thunder. The wind was getting stronger and the rain continued to fall. Johnathan Carstein was thoroughly soaked to the bone and was getting quite chilled. He pulled his ragged, patched and sopping wet cloak tighter about him and tried to push his discomfort from his mind. That was easier said than done. More lightning illuminated his surroundings and through the trees he caught a glimpse of a house in the distance. Johnathan’s hopes soared.

The closer he got, the more detail he could see in the house. The first glaringly obvious fact was that it wasn’t a house at all, but a mansion. Shutters clanged miserably against the windows in the wind and shingles were missing from the roof. The grounds were overgrown with thorny, twisting roots and vines and tree branches scratched at the siding and exposed windows of the building. It was a very gloomy and worn mansion. But whatever it may be, it was shelter and Johnathan only thought of it as such.

A huge double oak wood door guarded the sanctuary. A knock on the door echoed throughout the ground floor. Painted flaked off from his knock and he brushed his hand on his cloak. He waited. And he waited. Johnathan knocked again. Some of the windows were lit. He knew there had to be at least one person home.

Just when he was about to give up and leave to search out some other place the door was opened. A stooped old man peered out. “May I help you?” he asked in a quivering and wheezy voice.

Johnathan spread his arms wide and said, “Pardon the interruption, but I would greatly appreciate the chance to get out of this rain and perhaps a hot meal and a room for the night.”

The old man squinted and scrunched up his face and looked Johnathan up and down from head to toe. The rain poured from Johnathan’s hood and caused him to shiver. After a long pause that seemed to last for ages, the old man came to a decision. He nodded and stepped aside for the shivering Johnathan to enter. “It is not for me to decide,” he croaked “but we shall see what can be done.”

“Who decides?” Johnathan stepped inside and took his cloak off, water dripping from the heavy fabric.

“Lord Akkorah will decide. He is the master of this house. You are inside Akkorah Manor.”

It was a long walk to the dining room, where Lord Akkorah currently was, and Johnathan found the old man’s shuffling and uneven gait annoying. The hallway was coloured with pictures of long dead ancestors, or so Johnathan suspected. Oddly though, many of the pictures looked to be the same man with varying settings. Ancient busts sat in alcoves and only dim flickering lamps illuminated the trek.

He was led into a large room with a fire blazing off to the side. Large floor-to-ceiling windows that shook and rattled with every peal of thunder dominated the far wall and a giant dining table occupied the very heart of the room.

At the head of the table sat a burly middle-aged man. Strong and broad shoulders were covered with a long fur cloak and muscles strained against his shirt as if seeking release. Dark eyes stared out from under heavy brows in hostility and annoyance at the interruption. All said, this was not a gentleman to be messed with.

But what really caught Johnathan’s eye was the most beautiful woman whom he had ever seen. She wore a very flattering gown and dark hair cascaded down past her tanned shoulders, bathing her in a brunette halo. A cute button nose and full lips added to her attractiveness and he was instantly lost in her clear blue eyes.

The old man who answered the door briefly explained the situation to the master, who responded with a glower and a grunt. The servant quickly took his leave. Lord Akkorah looked Johnathan up and down, evaluating him.

“You may stay the night, traveler. Our servants will bring you a hot meal from the kitchens and conduct you to a room.” The Lord growled.

Johnathan’s eyes had not left the young woman and Lord Akkorah cleared his throat. “I regret that my daughter and I will not be able to attend you.” He snarled. Emphasis on the word daughter got Johnathan’s attention. “Our servants will now see to your comfort.”

The Akkorahs took their leave of the traveler. From the master’s hostile attitude Johnathan had no trouble envisioning the father and daughter performing some dark rituals. As the family left the room the daughter flashed Johnathan a smile. The smile did not seem quite right. It was a dark smile. Was it supposed to be mischievous? Perhaps hungry? Johnathan did not know and all contemplation ended when food arrived.

What a meal it was! A succulent broth started things off which left a warm feeling in the traveler’s stomach. The broth helped to lift the last vestiges of cold from Johnathan. The main course was an exquisite roast duck with seasoned potatoes and sweet caramelized onions. The smell alone had Johnathan salivating and the presentation looked like a piece of art. Lastly he was served a collection of fresh fruits and vegetables that he picked at contentedly.

The room that Johnathan was led to after his dinner was the envy of rich people all over the world. A fire was blazing and a comfortable high-backed chair was beside the hearth. More floor-to-ceiling windows covered the far wall which showed a splendid view of the grounds behind the house, or would have had the weather been more cooperative. A massive four-poster bed finished off the room. It looked as if it could fit a giant and Johnathan mused over the type of company the Akkorahs kept.

A young attractive girl smiled shyly at him as she drew him a steaming bath and excused herself. Johnathan relished the sensations of soaking the road from his bones. He couldn’t remember the last time he had had a bath. Was it weeks ago? Months perhaps? He did not know, nor did he care. This bath was making him feel much younger and stronger than he had felt in a long time. He stayed in until the water was cold and even then had to force himself out.

As he climbed out of the tub Johnathan noticed, for the first time, that there were no mirrors in the room. Now that he stopped to think about it, he hadn’t passed a single mirror since entering the house. Even the cutlery was dulled.

The traveler made his way a little uneasily back to the bed and found that the shy girl had laid out fresh clothes for him while he was bathing. He began to dress as his thoughts turned darker and he wasn’t sure he wanted to stay.

Johnathan reached for his cloak and looked out the window as another flash of lightning struck and thunder rolled. When he turned around he saw the Akkorah girl standing in the doorway. Johnathan started a little. He hadn’t seen her reflection in the window when he was looking out. She was wet, as if she had been standing in the raging downpour outside.

“Leaving so soon?” Her voice was musical and it trapped Johnathan just as her eyes had earlier.

“I really do not want to impose upon your hospitality,” Johnathan stammered. “You and your father have been quite kind.”

“Yes, and now it’s time for payment.” She edged closer and closer as she spoke, cornering him so he could not leave.

Johnathan’s mind started reeling. What payment? What could he possibly have as a lonely traveler that they could want? Visions of demons and blood sacrifices came unbidden to his mind. He pictured the girl with a snarl on her face and a bloody knife in her hand, her father hooded and chanting some arcane words. Shadows danced on the edge of his sight and chilling laughter filled the air. He shuddered at his own imagination.

“What…” Johnathan stuttered, his throat suddenly tight. “What form of payment?”

Her brilliant blue eyes shone and she smiled in her mischievous way. “I just want stories.” She said. “I don’t get out much and would really like to hear news from the country…” she ran a finger down his chest, teasing him and his heart skipped a beat. “If you wouldn’t mind, that is.”

“Not at all.” Johnathan couldn’t hide his relief. He was envisioning the worst, and it turned out that her request wasn’t so bad after all. “What would you like to know?”

“Everything. It has been so very long since we have had a visitor.”

Her last comment made Johnathan pause and think for a moment. Why hadn’t they had a visitor recently? He didn’t dwell on it too much though. He was just relieved that payment wasn’t in blood. He had no doubts that he would never be able to leave if the Akkorahs had decided that he couldn’t. Lord Akkorah did look like a formidable person.

They talked for ages. Johnathan told her of the fighting and the new king in the south. He told her of the mighty storm that hit the coast far to the west and of the fleet of fishing ships that were lost. The terrible wars to the east took hours to describe. He mentioned news both near and far, and he learned that her name was Danielle.

Danielle, it seemed, was eager to hear of all the news. Her looks were hungry, as Johnathan suspected, but only for knowledge. She soaked up all he could tell her like a sponge.

They spoke for what seemed like the entire night until Johnathan ran out of stories to tell her. Something had been nagging at him and he had to ask her about the missing mirrors in the house.

“My mother was terribly ill before she passed away.” Danielle somberly explained. “My father removed all the mirrors in the house for her. She didn’t care too much for her appearance when she was sick.” She laughed a short musical laugh. “People in the village actually believe we are vampires because of it. Can you imagine? Us as vampires?”

Johnathan smiled back at her. He was thinking the exact same thing as the villagers and relief flooded off of him in waves. He moved in closer and kissed her on the neck. Danielle tilted her head back with her eyes closed and sighed in contentment. As lightning struck and thunder rolled, Johnathan sank his fangs into her neck and started to drink.

The Akkorah’s were not vampires, but there was one vampire in the manor on that evening.

As I had mentioned in the last post, the ending to this story came as a complete surprise to me. I had imagined that there was something dark and secretive about the Akkorah’s, but I had no clue that the traveler, who only wanted to get out of the rain for the night, was the villain. Just one example on how stories and characters seem to take on a life of their own as you are crafting their world and adventures.